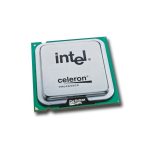 I was asked to review the Intel Celeron G1820. I had to do a good amount of research for this review, because I don’t know anything about CPU’s. The only thing I knew about CPU’s before this blog was the clock speed of them. For instance this CPU’s clock speed is 2.7 GHz. This means that CPU is processing at 2.7 billion cycles per sec.

This CPU is a dual core processor. A core, or CPU core, receives instructions, and perform operations, to fulfill those instructions. This CPU is not hyper threaded which would mean that it would have two threads for every core, but since it is not hyper threaded it only has two threads. One thread per core. As I said before the cores let you perform different operations on them like running an anti-virus in the back ground the threads allow you to split up those cores to be able to run more programs at once.

This CPU has 2MB of L3 cache. From the research I have conducted 2MB is not very good if you are trying to use this for anything more that surfing the internet or watching YouTube videos. Cache is memory on the CPU. Cache located on the CPU it is way faster than RAM since the CPU just talks to itself instead of transferring info between the CPU and the RAM.

As for reviews of this CPU I would say it is about 85% positive 15% negative. I personally would recommend this CPU to you if you are just trying to buy a cheap CPU and only use it for browsing the internet. You definitely wont be using this CPU for any sort of gaming. Unless you trying to play some Cool Math games.

Note: This is for a class project